The Intermediate Guide to Airport Recycling 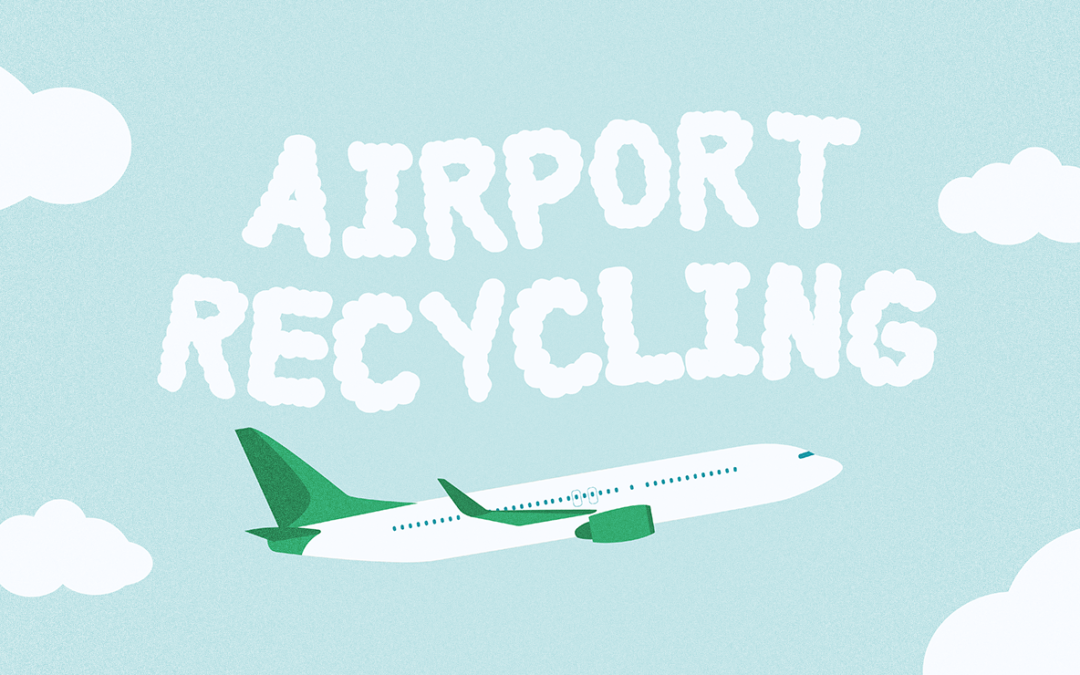 Airports are some of the busiest places in the world. Considering how hundreds of thousands of people from everywhere around the world visit the airport, it produces tonnes of trash on a daily basis. This is why airport recycling can be a gigantic step towards a green future. To become a zero waste facility, airports must focus on maximizing recycling and recovery and minimizing waste generated onsite.

Pivoting from the traditional landfill-centric system requires airports to make strategic changes around the facility. The US government recently announced a $1 billion grant to 85 airports across the country. The grant is supposed to help airports meet the post-pandemic passenger demand and deal with the uptick in delayed and canceled flights. This initiative will go to expand terminal capacity, provide access to individuals with disabilities, and sustainability among others.

In this article, we will discuss zero waste and its importance, the problem with airport recycling, and its potential solutions.

How Much Waste Do Airports Generate?

With millions of travelers visiting the airports every day, the airports must generate a ton load of waste, but the question is exactly how much waste do airports generate?

The San Francisco Airport (SFO) is one of the busiest and largest airports in the United States. Annually, it generates about 14,000 tons of material waste from which about 28 million pounds are recyclables and compostable materials. An average guest at the San Francisco Airport generates about half a pound of trash, and the numbers are not much different for other airports.

To bring about change, airports need to set a zero waste goal and work towards a green future. The San Francisco Airport set out to become the world’s first zero waste airport. It means that the airport needs to divert at least 90 percent of the generated waste away from landfills and incinerators.

Although we discussed the SFO in detail, it’s not the only airport to have a zero waste goal. More airports are jumping into the same goal such as Charlotte Douglas Airport (North Carolina, USA) and Gatwick Airport (London). To understand why so many airports are making such significant changes, we need to understand what zero waste is, the problem with airport recycling, and its solution.

What is Zero Waste?

“Zero Waste: The conservation of all resources by means of responsible production, consumption, reuse, and recovery of products, packaging, and materials without burning and with no discharges to land, water, or air that threaten the environment or human health.”

The next question is, why achieving the zero waste goal is important. The zero waste approach starts from the very top i.e. manufacturing (manufacturing fewer goods) to the very bottom, i.e. reducing waste that goes into the landfills.

The Problem with Airport Recycling

A waste audit of the San Francisco Airport revealed that despite their efforts to recycle and reduce waste, a great deal of recyclable and compostable items were still ending up in the bin headed for the landfills. The whole point of the three-bin system fails if the trash consistently went into the wrong bin.

Did you know? Less than 35% of what goes into recycling bins actually ends up being recycled. That is because people are still unsure about what goes into which bin. It all starts with educating the user, but that is a huge challenge for a large facility welcoming people that come and go every hour of the day. The problem worsens when you have people traveling from everywhere around the world and throwing garbage away without much of a second thought.

For the team at SFO to succeed at reaching their zero waste goal, they need to be able to efficiently sort the trash.

The Step-by-Step Approach to Establishing an Airport Recycling Program

The Ultimate Solution to Airport Recycling

An innovative and complete solution to airport recycling is smart bins that divert at the point of disposal while educating the transient population.

We never think twice before throwing away that disposable water bottle or coffee cup that we grabbed on the way. So, we can’t expect people to think twice about trash when they’re already late for their flight. To combat the issue, we need something that automatically sorts trash as soon as it goes into the bin and before it can contaminate other items.

A smart recycling bin like TrashBot is a bin that leverages technologies like AI, computer vision, smart sensors, and robotics to sort trash quickly and more efficiently. It’s the ideal solution for the airport recycling problem because the management will no longer be relying on the travelers to put trash in the right can. Rather, the user can dispose of their item, and the smart recycling bin will automatically sort it into the right bin inside.

With the glaciers melting, wildfires erupting, and temperatures rising around the world, climate change is becoming more and more real every day. A smart recycling bin can be a game-changing instrument that has the potential to solve the airport recycling problem. A smart bin like TrashBot can sort trash three times more accurately than humans and keeps improving gradually. It offers features such as AI-powered trash sorting, an analytics dashboard, mobility, and a built-in display that make both recycling and recycling education easier.